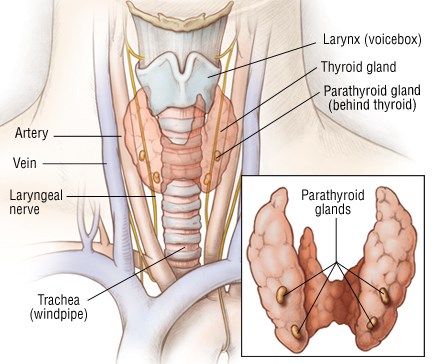 When too much PTH is secreted it creates the condition known as hyperparathyroidism. If too little PTH is secreted, the opposite, hypoparathyroidism is present. That is a lot of power for four little glands not much bigger than a grain of rice each.

The reason for dysfunction in the parathyroid glands is usually a benign tumour. The cure for hyperparathyroidism and parathyroid adenoma is parathyroid surgery.

The symptoms of disease in the parathyroid glands may be quite vague. They are easily mistaken for passing, everyday complaints. Some symptoms are more difficult to spot. Memory troubles and difficulty concentrating are signs that you may have an issue with too many, or too few, hormones. If you experience those every day complaints often you should consult your doctor to see if parathyroid disease is starting. The sooner the problem is found, the better the results are and quicker recovery is.

Parathyroid gland problems may not cause any symptoms. Women aged 50 years and over are much more likely to develop symptoms due to a parathyroid problem. Therefore if your are at risk for developing a parathyroid problem you should see your doctor for a routine calcium and PTH check. Once symptoms of hyperparathyroidism develop, they may include pain in the bones and joints, increased susceptibility to bone fractures, shrinking height, backache, muscle aches, thirst, frequent urination, abdominal pain, fatigue, nausea, loss of appetite, depression and other personality changes.

Hypoparathyroidism is characterised by low levels of PTH, which decreases the amount of calcium in the blood. Nerve and muscles cells are unable to function properly. Causes of hypoparathyroidism include magnesium deficiency, injury to the glands, after surgery for thyroid or parathyroid problems, genetic disorder or the congenital lack of parathyroid glands. Symptoms of hypoparathyroidism may include: pins and needles, brittle hair and nails, dry, roughened skin, muscle cramps and spasms or convulsions.

Speak to your doctor as soon as possible when you think you have any of the symptoms that point to parathyroid disease.

If you have questions or concerns about parathyroid symptoms see your local doctor who will arrange for you to see a thyroid surgeon.